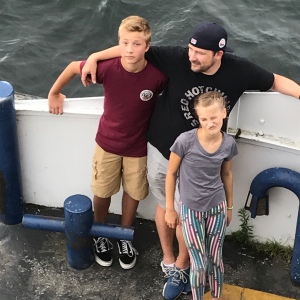 “Hello, my friend, I see you’re back again.

Hey, well, I’m tired, of this black and blue.

When the mornings are bad, they usually start the night before.

I know it before I go to sleep.

I may be exhausted, putting the finishing touches on dinner, getting the kids to eat, putting the dishes in the dishwasher, lying on the couch – television show so-and-so playing in the background.

My eyes are heavy. My mind says sleep.

But the second I get to bed, it’s a scary place.

And all I can do is pray for sleep.

Sometimes sleep comes without warning; sometimes it comes it comes all choppy – minutes of dozing, followed by minutes of heart racing. Sometimes it doesn’t, and I’m left to use what my logical mind tells me to do: breathe deep, lay calm and let this be my rest for the evening.

For the last few years (up until a few months ago) it was the latter that dominated. Sleep was a luxury afforded by alcohol, pure exhaustion or dumb luck.

But lately, I can find sleep.

That doesn’t mean I always want to get up.

And that’s a new phenomenon. Maybe it’s depression. Maybe its midlife crisis. Maybe its lack of motivation. Maybe, as my sister suggests, I should see a shrink.

But regardless of what it is, it’s a new reality.

Getting up can be Really. Fricken. Hard.

Welcome to the aftermath of extreme exhaustion.

And, I think, the early phases of recovery.

(There’s a sliver lining in this playbook.)

You’ve read this far, so my guess is: You have some sense of what I’m talking about.

Once I pull myself up from bed, I know this is a day worth living.

But until that moment, it’s not always a day I want to pursue.

Maybe it’s the questions about what I’m doing.

Maybe it’s the questions about what I’ve done.

But it’s always some sort of question – some sort of combination of them – that drags me down into the safety of my pillows and says: “I’m not ready.”

Granted, I always pull up.

Granted, I always move on.

But it wasn’t always this hard.

A couple weeks ago, I told my wife, Heidi: “I haven’t had time to grieve.”

I went to New Jersey on a couple days’ notice for my friend Liam’s funeral – saw his sister, saw his mother, saw his brother and wife, saw his other best friends, and just sort of floated through the experience.

There’s no blueprint for the way to “do death.”

You improvise. You make do. You say things in the moment.

And then you go home.

It’s in the moments leading up to sleep when you confront what you really feel; when you process (?) and try to make sense of what has just happened.

I’m not done processing. I haven’t begun processing what losing a best friend is like.

I’ve only begun processing what having a kid who just started high school; and another that just started middle school is like.

That doesn’t begin to tap into the sense I’m trying to make of my 9-to-5; a place where the only certainty is uncertainty.

A place where parents are aging, a wife is searching, a soul (souls?) is/are aching, and everyone is trying to do what’s best for all those involved.

This place in the middle?

It’s a hellhole of uncertainty.

Certainly you know it; or have known it.

The answers are nowhere. At least nowhere to be easily found.

She hasn’t typically done this.

But with her lying in bed; and me sitting across the room, she laughed: “Oh my god, your belly is big.”

It wasn’t meant to be mean. And I didn’t take it that way.

It didn’t bother me.

She’s right. I’m up 20 pounds – minimum – from the day I started that damn masters degree.

This has been the effect of piling on a shit-ton of responsibility, of trying to apply the same discipline to the mental sphere that I traditionally did to the physical.

On September 16, I will do my first major triathlon event in two years (1 mile swim, 26 mile bike, 6.5 mile run), but training for it doesn’t mean my stubborn 42-year-old body will suddenly drop the weight of three years in front of a computer.

So why even write this? What am I getting at?

Hell if I know.

This is stream of consciousness at it’s finest.

And for someone who always knew what they wanted to do at every step of the way?

I suddenly have no clue.

With no clear answer as to the path forward.

Am I a writer? A computer guy? A dad? A husband (and a sometimes shitty one at that)? A introvert wallowing in self pity?

I’m pretty sure this is what a midlife crisis is, right?

Spare me the fucking Ferrari.

I don’t need that.

I just want to know I’m on the right path.

Or any path, for that matter.

One that isn’t so clearly forced, or made up.

Or created just to make me feel better.

But I promised the silver linings playbook, so here it goes:

I’m making the choice to do healthy things every day.

Like running, and biking and swimming – or some combination of each – six times a week.

I’m choosing to fight through the uncertainty.

And when nothing else works, I’m choosing to read.

I figure: making a better choice, is better than making no choice at all.

And on the days I make all the right choices?

I think the trick is piling them one on top of the other.

On top of the other.

On top of the other.

And leaving enough space to reflect on why – exactly – I’m doing that.

0 comments on “The Lonely March”