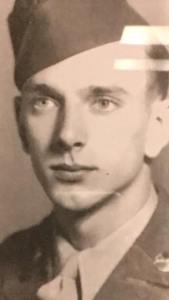 I know these places because they are engrained. Engrained like the sand that makes fossils.

You go to a place like Petrified Forest National Park and you learn that the “petrified” wood is not actually wood, but the minerals that flowed through the logs, fueled by salt water, when the high desert was buried in prehistoric oceans.

So it is with the home of Heidi’s grandfather and grandmother.

The placement of the couch, the tube television, the table tucked neatly into the side of the kitchen. The screen door, with its hydraulic pump leading to a kind of double-rhythmic close, the basement, with its collection of, well, a lifetime of collections.

Clocks for Heidi’s grandparents, something different, most likely, for yours.

These are things that seem real; the homes that were my homes, the homes I grew up with.

The homes that make sense.

These homes don’t exist anymore – well, they do – and every so often I stumble (settle, comfortably) into one of them. But for the most part, they have been replaced with “Facebook” homes – lots of perfection on the surface, lots of trauma just a couple inches deep.

The first time I went to Heidi’s grandparents’ home, some 15 years ago, before Beckett (and then again just after he was born), it was easy to fall asleep in the cool June air.

Upstate New York in June isn’t Phoenix, but it wouldn’t matter. The cool late spring air was a bonus. The soft double bed, the desk lamp, the narrow bedroom, the lived-in quality of the place – these are the things that made it easy to fall asleep.

No, it’s not like the stucco exurban neighborhoods that ring my city, where so much of everything has so little soul, so little depth.

In the old places, the places where people have been, it’s the soul of a place that gives you comfort.

Grandma and Grandpa’s had soul.

I slept there just fine.

If only I could sleep in my home like that.

At least over these last couple days.

Just before Christmas Eve, we said goodbye for the last time to Heidi’s grandfather, Paul. He was a myth of man – a reformed smoker, drinker, veteran, family man, who was so goddamn cool, he taught scuba diving before scuba diving was a thing.

He and his wife, Marion, would manufacture scuba diving equipment in their home – piecing together fabric into diving suits, fitting tanks and taking people into the depths of Lake Ontario.

Lake Ontario with its wild Nor’Easter tides, and algae blooms and deep, dark nothings. Forget the clear blues of the Caribbean – this was scuba diving in the wilds, in New York. And they did it before there were how-to web videos that made it all feel safe.

I came to know Paul well beyond those days. When the drinking and smoking had long since stopped; and the scars from those actions had largely been healed.

For 20 years, as part of Heidi’s family, I came to know a man who had found a certain 2/3 peace – 2/3 of your life clearly gone, and grandkids and great grandkids as the reward.

Paul was a joker; a guy who lived beyond the “standard guarantee of life” and a guy who never took that bonus round for granted.

Loving to an extreme; he laughed often.

He told his favorite stories frequently: how he attached a dab of Limburger cheese to a light bulb in his WW II barracks, and silently took pleasure as the Army guys tried to figure out the source of the smell.

Or, when later in life (when he owned a slew of gas stations in Rochester, NY), he told a group of guys the problem with a particular vehicle was the Fallopian Tube. (You can only image the laughs that came when the guys went home and told their wives the car Paul was working on had a problem with that.)

In the days before Internet, jokes like that were easy.

But they also required patience.

A kind of patience we’ve long since forgotten.

What a shame, really.

Because life is always about patience.

Heidi, her mother, her uncles, her step-father needed much patience these holidays.

The march to our maker – or whatever place you think you’re going – can be slow.

They endured the initial rounds of sickness – high-fevers, infections – only to watch the type of rebound a guy who lived to 93 would be (in retrospect) expected to make.

But in the end, after all the false starts and stops, he ended up in Heidi’s mom’s house, lying in a bed, Hospice care initiated.

Can we say enough about Hospice?

Where do these angels come from? This organization that carries a family through a process that is both natural and difficult?

Finally, free from the reins of the hospital care, thanks to Uncle Walt, we scrolled through photo album after photo album of 100 years of family history.

Beckett and Brody got to (attempt) to share their favorite movie (Elf) with him.

And he and I had a long, long talk about what one thinks about when they know death is near.

They’ll be no revelations here, because that conversation was … well, exactly what you’d expect it to be.

It’s not the mind that fails all people who live to 93. It’s the body.

Paul wanted his body to wake up.

But he would have said: it could happen … if only pigs could fly.

But I know that one of the best things that happened was Heidi’s insistence that we get up on Sundays, drive close to 20 miles to east Mesa, pick up her grandparents and take them to breakfast.

We did this for the good part of the last half-year, or more.

In the midst of work and my master’s program, this was painful.

But in retrospect, I look at those Sunday mornings as the best moments of the last couple years. We held Heidi’s mom, and stepdad, and grandparents close.

The kids got to know – really know – their great-grandparents. And it wasn’t in a stupid, superficial way.

There was no need for words, just presence.

How I long for those moments now – when he could walk, when he could defy the odds. Make mockery of the situation. Get his ass up and walk to the car, regardless of how fearful his daughter was that he couldn’t.

That’s a man, defining himself.

Always saying: I got this.

Straight ‘til the end.

I wasn’t there for the finish.

I was alone, in my home, while Heidi, and her mom, and step-dad, and Uncle John, stayed by his side.

I was trying to maintain a “normal” Christmas.

The kids knew that – they knew Mom wasn’t there.

So we made marmalade, we wrapped gifts, we did our thing.

And then they went to their aunt’s to sleep.

And then Paul went.

To his maker, to his final spot, to the place he wanted to be.

Pigs flying, in spite of it all.

0 comments on “When Pigs Fly”