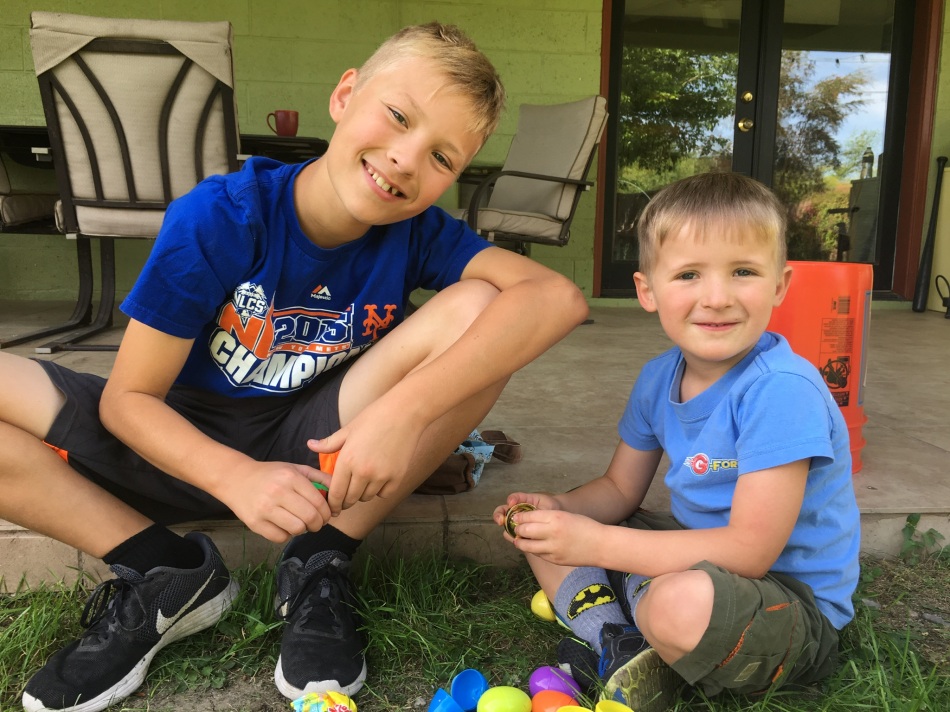 I knew the second I parked exactly where to go. Towards the doors on the second floor. Turn left. Follow the hallway, attached as an afterthought of expansion, to the old exterior, concrete walls.

Hit the buzzer, wait for admittance, proceed past the room – doors on the left – of contraptions to stretch and pull and prod muscles back into compliance.

Find the doorway on the right, with the number that matches your destination. Brace yourself for what’s next.

We shake hands. She can shake hands, I note. That’s already better than I expected.

And so I settle into a hospital room at Barrow Neurological Institute, just a few doors down from where Beckett began his first recovery from Guillain-Barre six years ago, with a woman whose journey I’ve followed for two-plus months now, but am meeting for just the first time.

“This place brings back memories,” I say.

“You were here when you had Guillain-Barre?” she asks.

The conversation goes from there.

This weekend, I finished a key component of my master’s program: a three-credit hellhole of a class crammed into four weeks. It involved up to eight hours of lecture, 400 pages of reading and six exams a week.

I finished Friday morning, then proceeded to pretty much blow off most of the weekend. I took in two Diamondbacks games and not much else.

On Sunday, I woke up in the clothes I went to bed in Saturday night; and spent the rest of the day in them.

Our (read: Heidi’s) primary accomplishment, was a goal to gut Beckett’s bedroom – to clean and either trash, or donate, a couple years’ worth of collected tchotchkes, paperwork and other assorted nonsense 12-year-old’s feel compelled to store in their domain.

This included a massive assortment of gifts.

Inevitably, as I’d walk into his room, bouncing between the Sunday D-Backs game on TV and the cleaning process taking place, I’d ask, “Where did this come from?”

And Heidi would say, “Beckett got it as a gift, when he was sick.”

As in, sick, this January, just six months ago.

And without fail, I’d respond, either out loud, or to myself, “I don’t remember that.”

(“How the hell did I launch our company’s website this winter? … Or put on the bocce tournament?” I mused to Heidi.)

It’s only when you start to heal that you realize just how far you were gone. I don’t remember most of January, or February, or March.

And as I relayed these stories to this woman in the hospital room, to whom I already felt a bond, just beginning her journey to recovery, the concept of lost memories kept coming back.

Her mother would relay stories of what had gone down the last couple months, to which she would often reply, “I don’t remember that.”

And I would share some other example of things I couldn’t remember. Things I would never remember, and only know existed or happened because somebody told me they did.

Such is trauma; such is life when the only goal is survival or repair or a fight back to something better. Such is the mind in the midst of a real fight.

A fight that matters.

The older you get, I’ve come to realize, the greater the odds you go head-to-head in one of these real battles.

Tonight, when relaying stories of my visit with this woman to Beckett, he told me about his time in the hospital, his dreams as the disease took hold, of being drowned, or suffocated, or sinking.

I shared with my new friend the way nothing was ever the same in the aftermath: the blood pressure, the anxiety, the way sleep terrified me – never knowing what the night would bring.

Would (will?) the exhaustion of sleep finally (please!) grab hold, or would one ear lock onto the wall connecting Heidi and I’s bedroom with Beckett’s, listening endlessly for the first sound of a seizure or of a restless kid destined (I was convinced) to come into our room and tell us his toes were tingling again.

Distance helps, for sure. But these traumas, they are manageable in the daylight, all-consuming in the night.

It’s true: it’s when you’re alone, with your thoughts, that the demons wage their war.

I would never lie about that.

I would never walk into a room, with anybody facing any frightening battle, and offer false hope. That’s petty, escape the reality bullshit.

Life – sorry to say – doesn’t give a shit about whatever fantasy you’ve been sold. The mind is relentless, an intense organism, formed and trained by everything we’ve taken in.

And it has control over everything.

It shapes our behaviors – our repetitive, destructive ones – manifesting itself in fears, and aversion and the repetitive pleas of why, why, why do I keep getting stuck here.

But it also shapes our appreciation of the simple – Lord, this day is beautiful, thank you! – and the very complex.

I will never understand the science of the deep peace I feel tucked between my wife and children on a Sunday morning, other than to know that it is shaped by my many experiences, big and small, that let me know: nothing matters more than this.

You know this, too.

You can fill in the blank about your trauma, your experiences and you know the way these things drive your behaviors, good and bad.

You know that lying is futile.

We must stare our battle in the face, do what we can to get “better” and come to accept our new reality. They teach this to addicts, and maybe to those who seek professional help for trauma.

But the rest of us either figure this out on our own or become consumed by the very thing we’re fighting.

In the aftermath of trauma, there is no return to normal.

There is the new normal. Nothing else.

It is there that what we’ve been through, what we fear, what we’ve learned, what we know, blends together into our new complex understanding of the world.

It’s different for everyone else. But for me, it’s something like this:

“The world is unbelievably, chaotically beyond my control. I can’t stop what will happen, medically, to my son, my parents, my wife, myself. But I can try to take steps to be as present in this day as possible, to have fun, to do the things that make me happy. To take a risk now and again. To tell everybody I love just how I feel about them. To do my job to the best of my ability. To try and be positive. To try to foster understanding. To try to give those who need a lift a bit of a boost.”

If I can do a little bit of that every day, that’s enough.

And, whatever I do, I tell myself, don’t let my mind tell me otherwise.

Most nights, when I write these things – no surprise – a few beers are involved.

And so, after capturing that last thought, I stepped outside onto my back patio and took a few swigs.

There was something I forgot to say, I think, something I told my new friend: “I rely on the odds, the numbers. And while there are no guarantees, the data is in your favor. It’s not that way for all people with scary diseases.

People with Guillain-Barre, for the most part, they recover. They do. Not always, but almost always.”

And then I’m back inside with my thoughts.

It’s gorgeous out there, I muse. Some random freak show of a deep Western low making it 68 degrees on a mid-June evening. By the end of this week, we’ll be flirting with 117, the weatherman says.

I pause, running out of thoughts, and think, “Where do I want to take this?”

My brain is so, so tired – thinking of my new friend and the battle she faces. Thinking of how I’m pulled this way and that, always wondering if I’m giving my wife, my kids, myself enough.

And in the end, after a long pause, I’m pulled back to where I’ve come to be – a place that feels acceptable and right, and makes it easy to end this missive: You’ve done enough.

0 comments on “Carry on, tomorrow”